If you’ve got a soft spot for trashy, unscary, 80s horror, you might have to give this one a go. Starting its life as Killbots, thankfully the movie was recut and renamed Chopping Mall, one of the most puntastic titles I’ve seen, and one so appropriate for its breed of low budget horror. From the equal parts fertile and parasitic mind of Jim Wynorski, a guy responsible for such gold as The Bare Wench Project and The Devil Wears Nada, it is really no surprise how this adventure turned out. It’s a ridiculous tale -technological advancements in mall security see robotic enforcers posted to a hip and happening suburban mall. They may be goofy looking, and kind of slow, but they make Paul Blart look like the teddy bear he is. One fateful night, the painful foreshadowing comes to a head, and a storm sends these Robocops haywire, embarking on an in-store demonstration of slaughter. Despite the ominous beginning, as we’re introduced to the Mallbots, Chopping Mall quickly reveals itself to be as shamelessly tacky as I’d hoped.

First, I have to commend Wynorski for taking the low budget teachings of his mentor, Roger Corman, to heart. Everything about this movie, maybe save for the robots, is so delightfully cheap and efficient. A closed shopping mall has to be one of the easiest and best value locations to shoot a horror. IMDb has the budget at $800k, which is honestly a lot more than I would have guessed. Then again, this was the mid 80s, and remote control robots wouldn’t have been so easy to come by. If I didn’t find them so endearingly silly, I’d say it was a shame they couldn’t at least make them at least a little scary for that price tag. Maybe the reason lies with the ‘Killbots’ creator Robert Short, who designed stuff on Piranha and, oh, Tom Hanks and Darryl Hannah’s mermaid romance, Splash. His partner in special effects crime here is Roger George, a guy with a much longer and more impressive list of credits, from Blacula to The Terminator. That explains the references.

Written by Wynorski himself, with help from first timer Steve Mitchell, Chopping Mall follows a pretty stock standard horror path. A bunch of young adults have gathered in the mall, which most of them work in, staying past lock-up to throw a sweet party. This party is only attended by four couples, or soon to be couples, yet is apparently important enough for newlyweds Lisa and Todd to drive interstate for. Then again, banging in a furniture store sounds like a pretty fun honeymoon. One thing’s for certain, though, heads will explode at this party. That’s where our friendly neighbourhood Killbots come in, taking out their techy minders and turning their laser sights on anyone else left in the mall. For some reason the place goes into a Dredd-style lockdown, trapping our hapless party goers, and the screaming begins. What follows is a classic, and wonderfully cliche game of cat and mouse – scrounging for weapons, formulating stupid plans, and arguments about sticking as a group – all the while folks are being picked off. If it wasn’t for the over the top kills, and George’s special effects getting some decent leeway, Chopping Mall would be seriously dull. Those cartoon laser effects, such trashy goodness. Watching the silly, bulky killbots roll around on their tracks, arms raised like crabs, is pretty great, especially when they utterly destroy people. They’ve got lasers, little tasers, and those silly arms can apparently rival Patrick Swayze’s throat-punching in Road House. However deliberately or not, they serve more as comic relief than scare makers. One of the best moments in the movie is a techy getting his throat smashed through a centrefold he’s holding up. Pure gold. It’s even better when topped off with the catchphrase “Thank you, have a nice day,” voiced by Wynorski himself, of course. There are frequent, woeful attempts at suspense throughout, always redeemed by their excessively stupid payoffs. Despite the trite affairs, there seems to be a significant amount of irony and self aware humour at play. I mean it’s so bad I can only believe it’s at least partially intentional. Nothing the cast and crew have done particularly stands out, and yet it all comes together for a daft and enjoyable time. The acting on show is at a wonderfully appropriate level for the production, with B Movie editor Leslie Rosenthal lingering on certain shots and awkward expressions in a way I can only assume is tongue in cheek. Barbara Crampton, of Re-Animator and Fraternity Vacation, and gifted bit-part player Suzee Slater have the scream queen thing down pretty well. John Terlesky plays the horny jock type to a tee, the guy then went on to take over from Richard Hill in Deathstalker II, later becoming a successful TV director. Ryan’s Hope regular Kelli Maroney is the shy love interest to The Karate Kid‘s Tony O’Dell, and I’m only really mentioning them because she has a scene where she headbutts a glass door in. Oh, the illustrious Dick Miller makes a pretty great appearance too. Letting the low budget team down is the mall music soundtrack, by regular Wynorski collaborator Chuck Cirino’s, which is not particularly enjoyable. 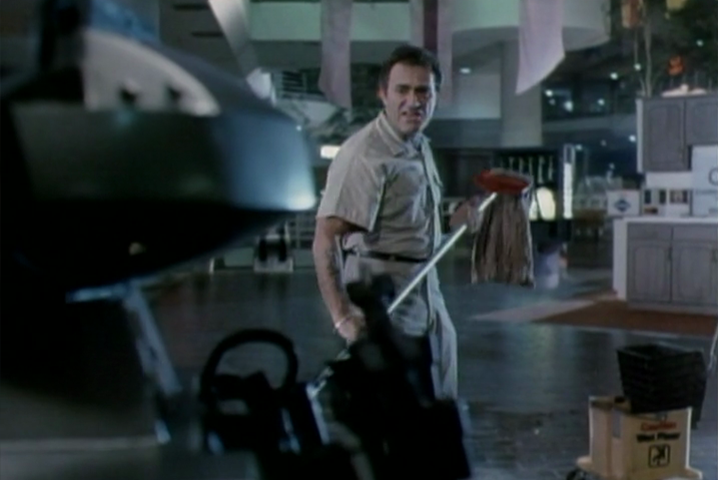 There is so much to say about this movie, despite the fact that it’s really not very good. There hangs an air of low budget self-awareness around it, something Wynorski seems to have developed a career around. The story is very plain, yet it is a blast to watch our actors scurry away from plastic, discount store, tractor robots, which for some reason sound like they’re packing V8s. There are an abundance of woeful confrontations between the two parties, from disappointing molotovs, to really poor shootouts. I love the way characters catch robot lasers all the time, are unscathed, and then start bleeding. While I don’t like to spoiling anything, classic moments include lasers being reflected by ‘clever’ use of a mirror, and Russell Todd riding a janitor cart valiantly into battle. When it’s all over, including a sinister, after credit scene – Marvel eat your heart out – you’ll probably feel that Chopping Mall is a silly and futile mess. That, of course, is a glowing endorsement.