Fasten your seatbelts and mind the exits on this high flying, Technicolor, super cool, 70s adventure. Think James Bond meets Hong Kong Kung Fu, rolled into a silly and sexy exploitation package. Directing and producing this international romp is prolific, Filipino mastermind, Cirio H Santiago. This guy and his first-class, low budget output, spanning over 7 decades, never ceases to amaze me. On Fly Me Santiago blends silly comedy, with a sinister human trafficking plot, broken up by wonderfully tacky fight sequences. The scenery, shot between Hong Kong, Manila, and Tokyo, provides a killer backdrop to the shenanigans on screen, and offers cool, retro snapshots of these major cities. Without the overprotective, stereotypical, Italian mama character, this could have really been a dark, gritty, and immersive tale  – but who in their right minds would say no to a little stupidity? 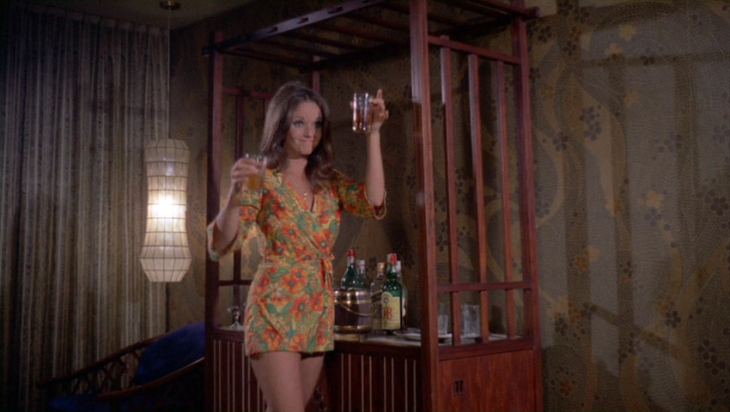 The sweet, 70s style had me salivating from the get go, as the introduction gives way to a rather clever still-shot montage, backed by a swinging score. Apparently Santiago quite likes montages. We’re quickly introduced to our young, attractive, stewardess protagonists. They fly around, go to swinging parties, and drop their delightfully retro uniforms at any opportunity. Seems like exhausting fun. Toby is the newbie, accompanied by the aforementioned Mama, Andrea has a steady partner, and Sherry is the type who likes to sample the whole menu, if you know what I mean. Problems arise when Andrea’s boyfriend goes missing and no one has any leads. Strangely enough, though, she is regularly beset by attackers – including screeching Kung Fu man, a husband and wife karate duo, and a blind guy with a blow gun. Yep. Fortunately, Andrea don’t need no missing man to protect her. The girl kicks some arse, knocking one guy out just by punching him in the balls. That said, she does have a friend – from what I can tell his name is Lin… Rickshaw – looking out for her, perhaps a little too intently though. As poor Andrea is on the hunt for clues, while bad guys hunt her, Toby and Sherry are off doing much more enjoyable things. Toby also finds herself pursued, in a romantic sense however, by David the doctor. Mama doesn’t like that her precious, innocent daughter, is being chased by a “playboy” type, wishing she’d be chaste instead. By the way, David isn’t just any doctor, he’s a “bone specialist.” This bizarre love triangle of sorts provides a wacky, comedy element that shakes up the otherwise intriguing and disturbing narrative. The obnoxious and vaguely racist mother, and her almost supernatural ability to cockblock the young lovers, seems incongruous but creates some genuinely funny moments. It offers a little social comment too, as the phrase “I’m an American citizen” is thrown around a lot. Meanwhile, Sherry is off doing everyone in sight, and making the most of her jet setting lifestyle. As the plot thickens, all of our hostesses wind up in grave danger, targeted by the same human trafficking operation. 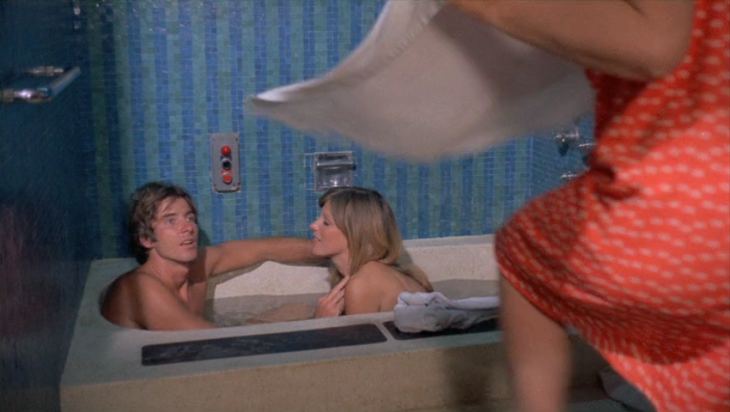 It always comes as a nice surprise when actors in exploitation movies actually pull things off. Pat Anderson, as the exuberant Toby, Lenore Kasdorf, as the sensible Andrea, and Lyllah Torena, as party girl Sherry, are all young, beautiful, and can kind of act. Each had experience in low budget productions prior, and continued working in similarly seedy movies after, with Kasdorf the only one making much of a career. It was more of a shock not to get pulled out of the zone by hilariously bad acting. Sure, Richard Young as Dr David is a little silly, and Naomi Stevens as Mama is annoying, but I’m pretty sure that’s intentional.

Maybe it was the presence of Piranha and Gremlins director Joe Dante as a dialogue coach, bizarrely enough, that got the actors in shape. That’s probably a bit of a stretch, though. Santiago regulars Ken Metcalfe and Vic Diaz also make small but memorable appearances, with Anderson becoming a bit of a regular collaborator herself for the rest of the decade. There are some great cameos too, from the likes of Dick Miller – that Bronx guy in everything from Gremlins to The Terminator – and future Filipino film star, Leo Martinez. I swear I’ve seen the Lin guy before, and he kicks some arse as well, but strangely no character is listed with that name, and I can’t place him for the life of me. In fact they’ve done a generally terrible job with the credits, with names appearing in the opening credits and not in the end credits and so on. Working under low budget legend, Roger Corman’s New World Pictures, Santiago has conjured some of his typical magic on Fly Me. There is some genuinely professional and clever work on show, from the stylish Bond-esque moments, to the imitation Kung Fu flick sequences, complete with rapid zooms and yelling. I mean, the action is terrifically dodgy throughout, but it’s totally entertaining. The cinematography and the snappy editing work well across the different scenes, from appropriately disconcerting handheld shots, to landscape montages worthy of travel ads. There is even some occasional, abstract framing. Santiago seems to have everything, even the sex scenes, pretty ruthlessly, shoehorning the story in to a tight 72 minutes. I did wonder if this was some kind of censored version. I could have had at least 10 more minutes of the deliciously 70s costuming alone. Keeping it all swinging is a killer score, featuring plenty of guitar and organ, in some kind of a mix of Surf Rock and Jazz. Again, the credits are a little vague on who’s behind the music, and sadly we may never know. 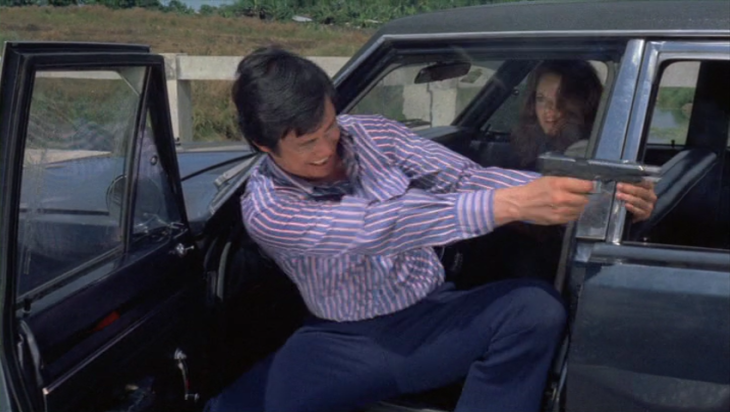 On paper, Fly Me is a silly, exploitation romp, featuring stewardesses and Kung Fu, but it turns out to be something even more. Taking some of the coolest elements from popular 70s cinema, it mixes them into a fast paced and menacing story, making for a cheekily enjoyable time. If Bond films were a fine, aged single malt, this would be Johnny Red. Throw in some cheap, Hong Kong Kung Fu flavour for mixer, and add a twist of Peter Sellers, and it’s more than enough for a good time. Seriously though, just the early 70s landscapes of Hong Kong and Tokyo had me going, with more neon than Blade Runner. Then there’s all of the outfits. The acting is solid, even if the vibe yo-yos back and forth from sinister to silly, and the film transfer looks a treat – complete with spots and scratches. This is cheap, high flying escapism that should bring a big grin, probably best served with gin and tonic.