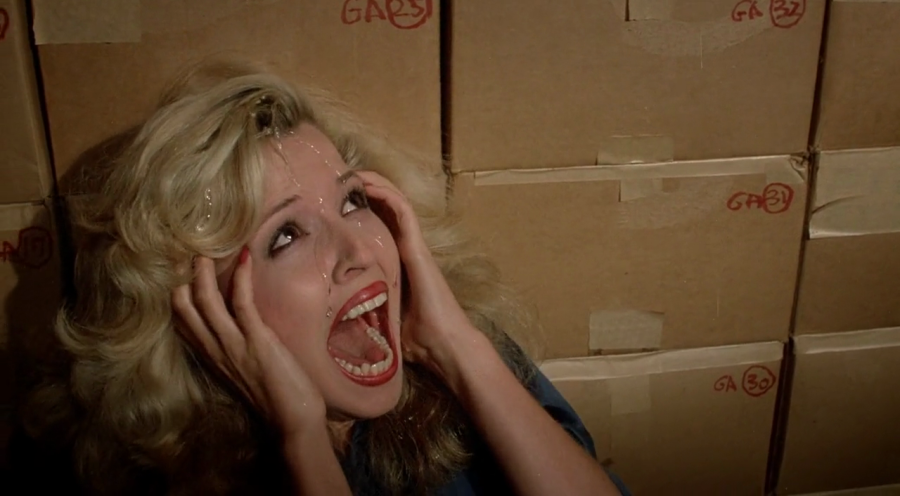 Let’s dive right back in to the wonderful quagmire of low budget, 80s horror, this time with extra Sci-fi goodness. Springing from the fertile mind of trash auteur Fred Olen Ray, Biohazard is a ridiculous adventure chronicling the arrival and escape of an alien in some kind of Area 51 situation. You see, the obsessive Dr Williams is combining super science with the supernatural abilities of a strange, white-wigged lady in order to access other dimensions. Of course, this leads to an event much bigger and more dangerous than he bargained for, leaving a trail of destruction, murdered townsfolk, and pop culture references. If you’ve ever wondered where Stranger Things got its ideas from check this one out, and I guess E.T. and The Goonies while you’re at it. Not that this cheap scare flick is particularly original itself, taking heavy inspiration from Plan 9 From Outer Space and a host of other classic Sci-fi. Come to think of it, Ray is basically a modern, self-aware Ed Wood, and I mean that as a glowing endorsement. 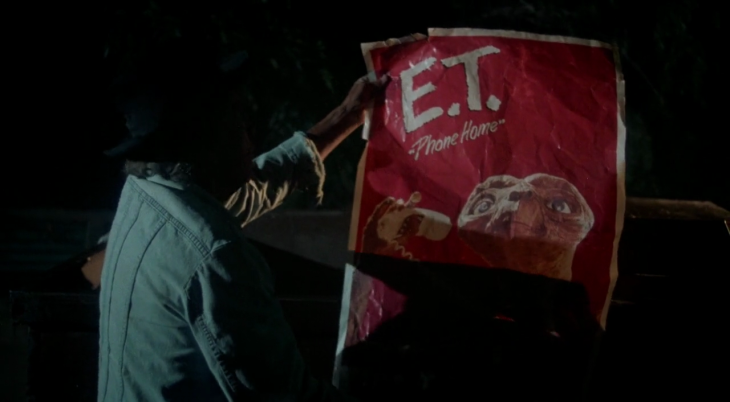 Biohazard was early in Ray’s bountiful career, back when he was exclusively making dirt cheap horrors. It’s a noticeably less polished product than the likes of Cyclone and Beverly Hills Vamp which followed, and that’s not a high bar to set. However, as is so often the case, the poor quality only proves to make it more endearing, and rare moments where the production triumphs even sweeter. Watching the bloopers spliced into the end credits, all 10 minutes of them, paints a painful picture of Ray’s creative experience on the project. He seems to be desperately trying to make things work, but unprepared and inexperienced actors, and the low budget nature of the production keep dragging him down. The combination of a shortage of film and a lack of remuneration for the actors is painfully obvious in the final cut, with or without the bloopers. Those are only in there to extend the otherwise 70 minute run time, that and I guess Ray was a The Cannonball Run fan. While clearly never intended to be a masterpiece, it instead turns out to be a wonderfully silly genre film, featuring plenty of laugh out loud moments. 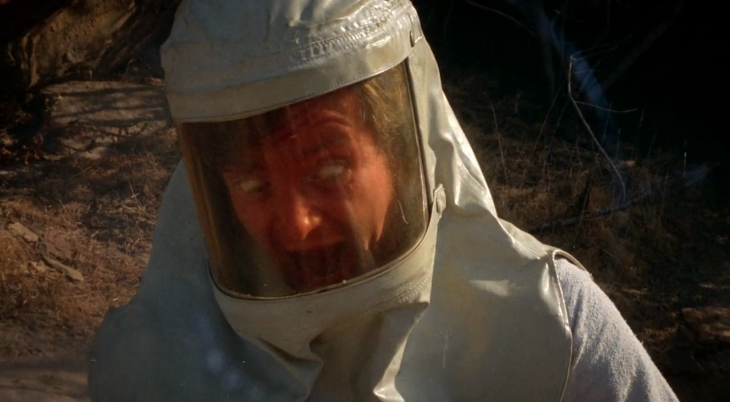 There’s not a lot of meat on the bones of this spooky story, yet its short enough that it barely matters. Moments where the alien creature attacks, and pointless undercurrents bubble, are really quite enjoyable. Ray seems to believe every character has potential if you give them a scandalous, hinted-at back story. The events in Biohazard are mostly plucked from the boughs of golden age Sci-fi, and sporting a shiny, 80s horror lustre. I’m talking a lot of small town couples being preyed upon by a mysterious monster, and a lot of tense conversations between its pursuers. As a result, nothing in the narrative is particularly surprising, even when it’s meant to be. The only real exception is the out-of-this-world ending, which has probably been done before, but damn is it a cracker. The reason is that everything – from the props and makeup, to the script and the acting – is so obviously cheap and unprofessional. Even the most cleverly shot night scenes, and Drew Neumann and Eric Rasmussen’s spot-on score, can’t make it frightening. While there are some pretty decent jump scares, you’ll be in such a heady daze of amusement and bemusement that they won’t work. Rest assured, it is still an absolute scream of a trashy spectacle. 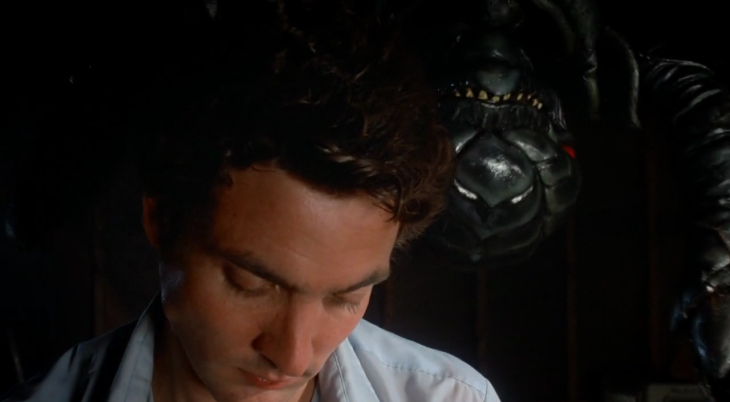 Written by Ray, Biohazard is a flavourful, yet weak, cocktail of intriguing, silly, and bizarre. The first half of the movie is a rather unexciting affair, one that may have you thinking instead about David Lynch, and hoping it all leads to a juicy payoff. Incidentally it kind of does. There’s never any suspense built, but there is an entire act dedicated to foreshadowing. Then wow! A little plastic alien pops out of a space trunk and goes on a rampage. Okay, I’ll back up a little. I mentioned Dr Williams and his odd-looking assistant, and their experiments to bring in objects from other dimensions. Well, they hold a demonstration for some military and government types, and apparently reel in a big one this time. 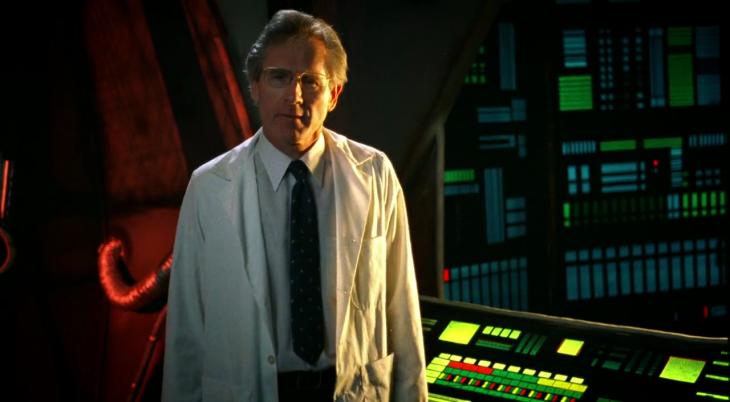 It’s a burnt up metal box with something inside. Cue horror score. By the way, a scientist dies during this demonstration, it’s a really cool sequence, his flesh kind of disintegrates, but it’s also totally irrelevant to the plot. Fortunately, it marks the first of a few grisly, makeup-heavy deaths, as the interdimensional traveller escapes. You see, this barely 3 foot tall alien, played by the director’s young son, loves to claw people’s faces, and leave facehuggers lying around. There’s some mention of radiation too, maybe that’s why his victims are also left foaming at the mouth, but who really knows? On the trail of the creature is Carter, a military man with a problematic past he can’t seem to get over. Enlisting the assistance of the assistant Lisa, the pair scour the nearby countryside in an attempt to recapture or destroy the creature. I mentioned the generally poor acting, exacerbated by a lack of time and film, but the amount of flubbed lines in the final cut is hilarious. That said, it all kind of blends in with the level of production. Richard Hench – becoming a regular of Ray’s – and his gal – Loren Crabtree, a first and last timer who somehow looks so familiar – are some of the ill-fated townsfolk who make their minor parts memorable. George Randall, Stuart Weitman, and Emmanuel Shipov as hobos make for some zany distraction from the vaguely tense affairs. Ray sure likes to use slobs and bums as comedic relief.  Art Payton also nails his bit as the reckless and abusive scientist, despite this being the first of few roles for him. His telepathic assistant is Angelique Pettyjohn, a familiar face from early exploitation movies and Elvis’ Clambake. Sadly her career was on such a downturn she had switched to hardcore flicks before this, her penultimate project. The biggest name is Aldo Ray, a minor star in the 50s and 60s, and regular of George Cukor’s. His career was on an eerily similar trajectory to Pettyjohn’s, ending up in Amir Shervan movies soon after, although I’d call that winning if I was him. William Fair rounds out the mains as Carter, this is his first feature and it shows a little despite an admirable effort. Don’t feel too bad for him though, he was in an episode of Seinfeld. 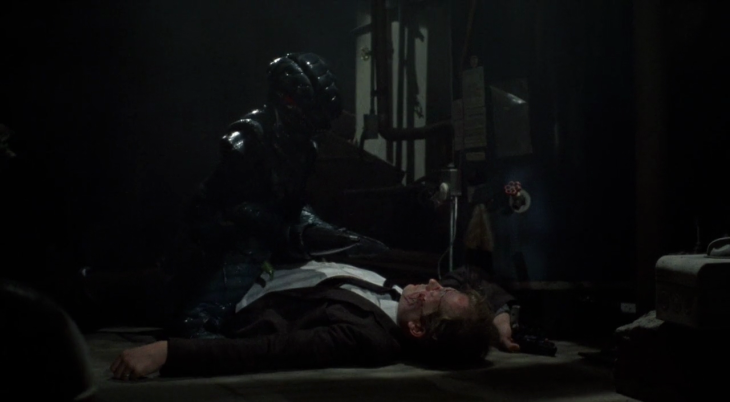 Biohazard could be written off as a cheap, predictable horror that’s comically short on narrative. Yet that, combined with the all the other things – the shaky, handheld POVs, the impressive but unmistakably cheap makeup, and the noticeably silly sound effects – make it seriously fun to watch. These nuances, and the lack thereof from the cast, are things you can’t fake, only found in the lowest of budgets and tightest of schedules. This is vintage, B Movie horror that scrapes the bottom of the barrel knowingly, in a way only a few straight-to-video visionaries like Fred Olen Ray can. There’s little chance any real frights, even with the occasional triumphant combination of sets, lighting, and camerawork that manage to make the silly seem spooky and surreal. This has to be up there as one of the trashiest Sci-fi Horrors ever committed to film, so of course it’s a damned good time. That end reveal is a killer.