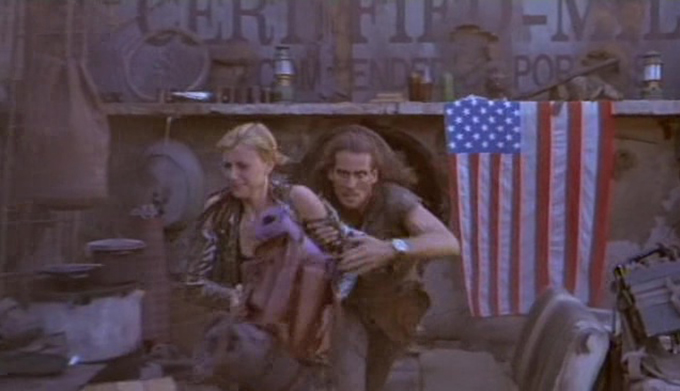 Has post-apocalyptic sci-fi not been the greatest gift to trash cinema or what? This one is right up there with the best of them, so strap in, press play, and enjoy the ride. I don’t even need to say any more, but it’s me so I will. This early 90s, poverty row production was the theatrical swansong for illustrious trash house Cannon Films. Written and directed by eclectic madman Boaz Davidson, featuring Tarzan himself, it seems the stars really did align here. The movie is a visual feast with a lean, yet flavourful story, featuring way too many many cooks in the kitchen, making for a delectably derivative action flick. Think The Bible meets Terminator 1 & 2. Anything you could want from a post-nuke, action movie is here, and even stuff you don’t – it’s got shanty towns, unstoppable cyborgs, dystopian sex punks, underground lepers, and an epic mission to deliver the one fertile woman in all the Americas to safety. Did I mention her tank-dwelling foetus is along for the ride? American Cyborg: Steel Warrior, is a masterpiece of low budget production, with a title about as awesome as the movie itself, a totally predictable journey of great entertainment. 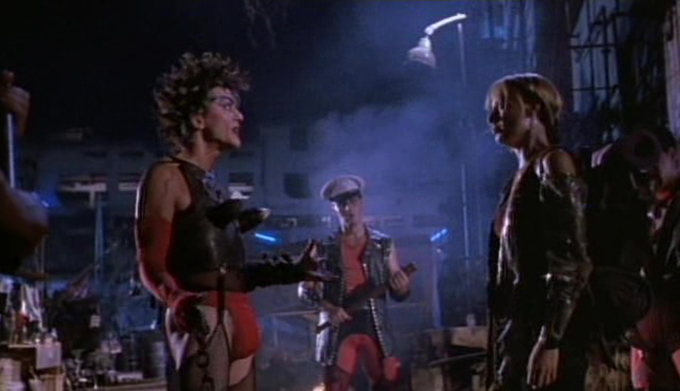 So how does Boaz Davidson do it? Effortlessly sliding from Israeli teen sex comedies to US ones, to horrors, sci-fis and everything in between. The man has been all around the low budget block. I have no answer to that, except to say perhaps he is more of a trash auteur than I initially thought. Returning to his native Tel Aviv to capture this fantastically desolate, post-nuke action journey, he has honestly created quite a visually engaging film. No seriously, this is some of the best sci-fi setting and costuming I’ve seen outside of mainstream cinema, for the era at least. It might just be the VHS blur, but the sets are imposing, industrial, and authentic looking, and there are actually some enjoyable special effects. Writing that I’m wondering if I’d had more to drink than I realised, but hey. 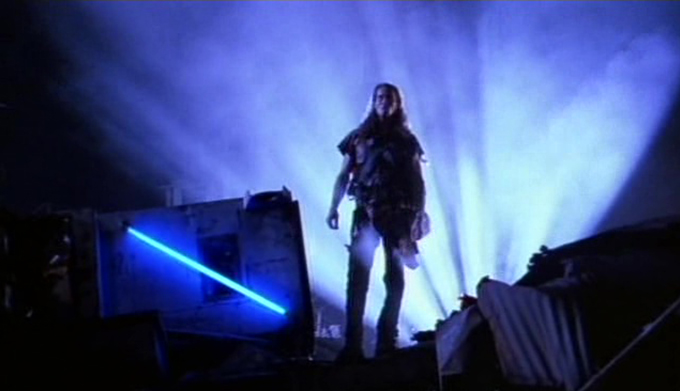 Something of a spiritual successor to Cannon’s earlier Cyborg, American Cyborg: Steel Warrior sees a damsel in distress needing help crossing the utterly inhospitable, dystopian wasteland that has become of the Americas. Not wanting to cheap out on the story, Golan and Globus really brought together the brains here. There are three fellas who’s only prior credit was 9 1/2 Ninjas, a guy who went on to write critically acclaimed (not really) animation Foodfight and uh, Halo 4, and one guy who was usually a producer. Hey, don’t scoff, they probably paid almost as much for those five as they would have for one real writer! Under Davidson these guys have somehow come together and created a cohesive and comprehensible, if totally basic and uninventive, story. How much of the writing Boaz did is unclear, though I’m willing to bet this was a child of his unhinged and fertile mind. The whole thing is a massive rip-off of Terminator 1 & 2 but with much more overt and obtuse biblical elements. Throw in a quest narrative, add a dash of Blade Runner for good measure, and you’ve got yourself a hell of a story that you’ve totally seen before. 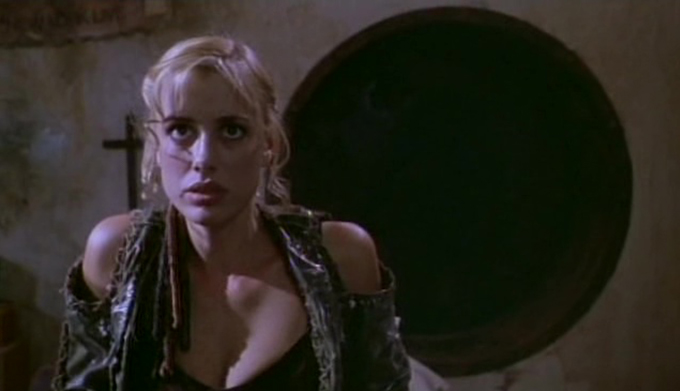 The focal point of the movie is the resourceful, yet vulnerable Mary – Nicole Hansen, who has a couple of fantastic looking credits but not much else. She’s the last fertile woman on earth, or at least locally, and under the medical aid of the rebels she has produced the first human foetus since the apparent nuclear war. I’m a little suspicious of exactly how they found out she was fertile though. She’s called Mary because she must travel to the promised land in Europe to save the child from certain death. Yeah, the Bible is another title heavily plundered for this narrative. Unfortunately a big-old, white-haired cyborg is programmed to stop her – one of those bits of Blade Runner I mentioned. Luckily she happens across Tarzan, I mean Austin – Joe Lara, soon to be of minor TV fame for hanging out with Jane. Sadly the cyborg never gets a name – John Ryan, who’s list of credits is long but only notable for Coronation Street which he somehow bagged right after this – but he’s basically the T1000. He relentlessly pursues Mary, her unborn child, and their protector, destroying everyone in his path. If that wasn’t bad enough, the pair (or should I say trio, what’s the medical consensus on foetuses?) have to fight all manner of weird dystopian baddies, and each other, while dodging acid rain, to deliver the miracle child (almost child?) to safety. I’m happy to say they look the part at least. 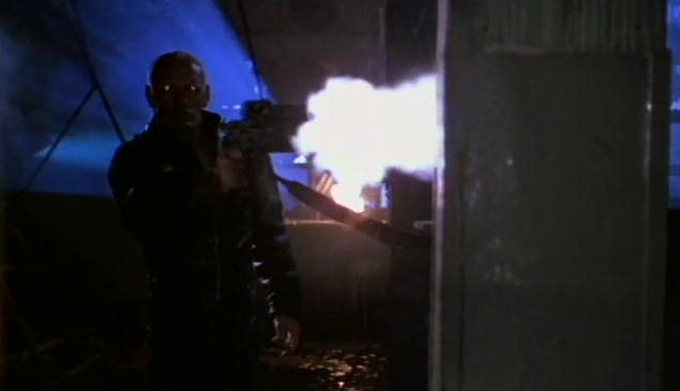 Despite the plethora of writers, there really isn’t much to the narrative of American Cyborg: Steel Warrior. The bulk of the effort has gone into the fight scenes, which are cool but nothing ground breaking, and a little into the suspense and romantic tension in between. As you may have guessed, there’s hardly any substantial dialogue. Yet, to Davidson’s credit, the movie is never boring. Honestly, though, you’ve got to give some props to the relatively unknown actors for holding up under this creative adversity, with such little experience between them. Sure they look pretty wooden, and Hansen’s delivery in particular is hilariously emotionless, but maybe they were going for a post-nuke shell shock vibe. I mean, Lara was the only one who’d had any real screen time before, on a garbage Tarzan telemovie no less. Yet here the three of them are, basically carrying an entire film. Not that Ryan really does any “acting.” He even blinks every time his gun goes off, which is pretty hilarious, but he looks bad arse at least. The only breaks the trio get are a couple of run-ins with post-apocalyptic baddies, and a brief but memorable appearance by first timer Helen Lesnick, as Austin’s sassy gal pal who takes a shining to Mary, and her pants. “Why don’t I climb in there with you and we’ll enter in a three legged race?” 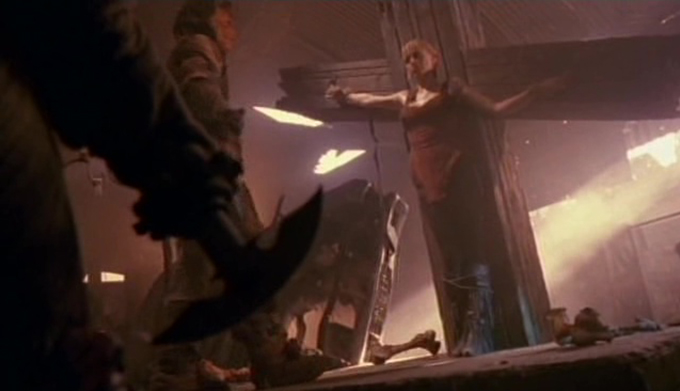 All that said, I did thoroughly enjoy pretty much every minute of this sci-fi slugfest. The actors did their jobs, and the production value is really quite tremendous considering how low I assume the unlisted budget was. Golan and Globus, and by association Davidson, are clearly masters of the b movie machine. They made their name churning out tasty slop, featuring everyone from Chuck Norris to John Claude Van Damme. Make no mistakes, while I have been pretty positive about everything, this is cheap, tacky garbage. It’s all the more surprising then how cool American Cyborg: Steel Warrior looks and feels. A few blue fluoro bulbs and some flames go a long way. Maybe the boys still had connections in Tel Aviv, as they found a sweet location, and managed to turn it into a full-blown, post-apocalyptic shanty town, complete with lights, computer terminals, fancy screens, and fake medical equipment. To be fair though, most of the visually engaging stuff comes in the explosive opening act, where they expertly blew the majority of their meagre budget. The scenes from there on become increasingly brown and dull, re-using many of the same spots, but that’s the genius of making a post-nuke sci-fi. 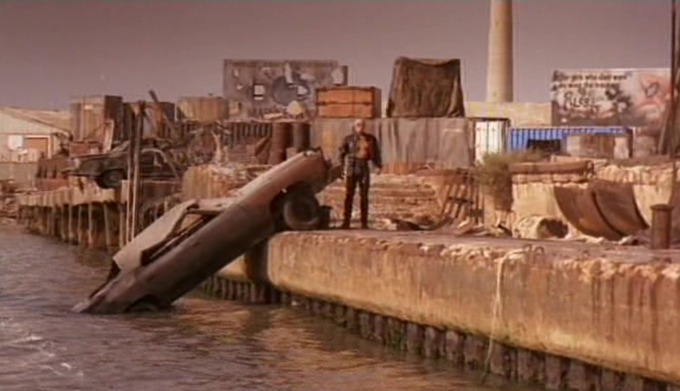 For all its relatively impressive visuals, exciting action, and Terminator imitating, perhaps the greatest feature of the movie – perhaps even Davidson’s greatest gift to cinema – is the foetus shot. Yeah. Not only is it an ingenious way to avoid having your lead actress in pregnancy costume the whole time, the glowing tank of foetus in Mary’s backpack is a frequent source of utterly disturbing hilarity. Words can barely do justice to the seemingly impossible balance of stupidity and genius that thing represents, and boy is it ugly. I also have to extend some of the praise to Alain Jakubowicz for splicing those shots in to such unsettling and comedic effect. The guy is a b movie legend in his own right, by the way, having done everything from editing Cyborg to production managing Masters of the Universe. There’s also the touch – deft or daft, I’m not sure – of an infectiously odd soundtrack, by a guy with one prior movie credit, Blake Leyh. He obviously got the Terminator memo, employing sporadic, heavy drums, weird industrial noises, and sparse synth riffs. These are gloriously repeated, almost tediously, throughout scenes, capped off with some harmonica, and the foreboding chants of a monk chorale, years before Marty O’Donnel perfected it on Halo. This silly attempt at an epic score is complemented nicely by the awfully poor sound effects, featuring some hilariously obvious dubs. 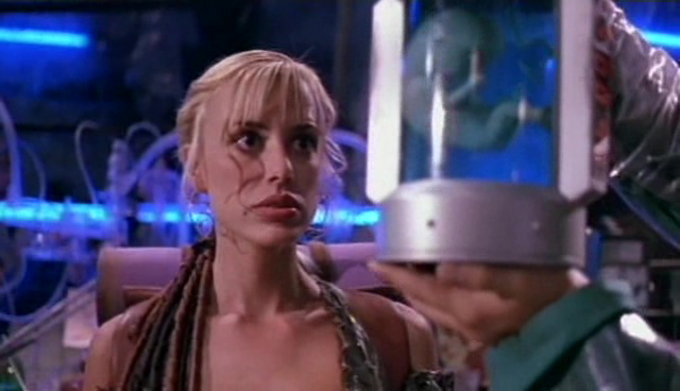 I was seriously surprised American Cyborg: Steel Warrior as enjoyable as it was. I mean I had high hopes, but I was expecting a production more on the level of Mutant Hunt – ridiculous stupid and shockingly tacky looking. Instead, Davidson has pulled together a few production elements that do well to hide its likely pitiful budget, with help in many ways from Cannon Films. The art direction and production design, are of surprising quality – or perhaps just sufficiently cool – and really go a long way to making the movie feel awesome. Hell, maybe the basic and blatant rip-off of a story also helps get us invested, catching us unawares in its cheap familiarity. I can’t in good conscience compliment this excessive and uninspired writing cohort though. I guess they struck upon something though, as this comes across like a wacky international  bootleg of the two Terminator films released at this point, and if you’re at all inclined to wade into a refuse pile like this you probably hold those about as dearly as I do. So, while I suspect American Cyborg: Steel Warrior is a wonderfully rubbish accident, it is a hell of a good time. Perhaps instead it’s a cleverly constructed piece of low budget cinema, and I’m totally willing to give these legends the benefit of the doubt.

Also, I can’t help but thinking there’s a weird parallel between the ending here and that of the new Blade Runner, maybe Denis Villeneuve is a closet Cannon fan? Nah. 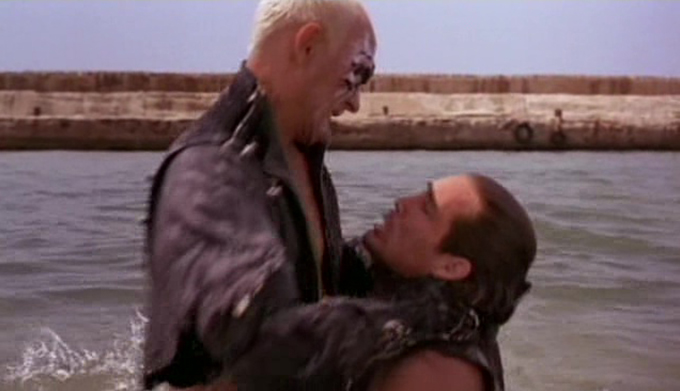