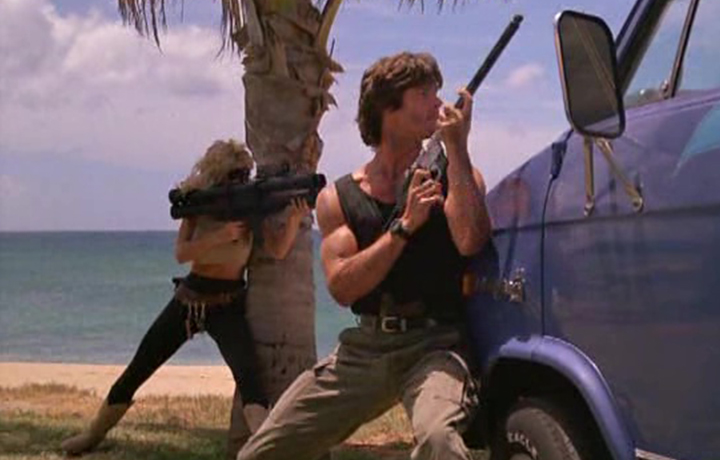 I don’t know how it’s taken me this long to get around to writing about the incomparable works of the late, great Andy Sidaris, but I am truly sorry. The Emmy award winner, yes that’s for real, started out as an immensely successful sports director for ABC in the late 60s, shaping the coverage of everything from the NFL to the Olympics. Fortunately for movie fans everywhere, his retirement plan consisted hanging out with attractive people and making cheesy action-adventure movies set in Hawaii, and occasionally Dallas. Over several decades he proved himself to be a true direct-to-video visionary, gifting the world with over a dozen fantastically silly flicks, packed with espionage, explosions, and centrefold models. Which brings me to Hard Ticket to Hawaii, a real classic and perhaps the purest example of the brilliant Sidaris style. It blends James Bond style hijinks with monster movie silliness for a deliciously refreshing tropical experience. 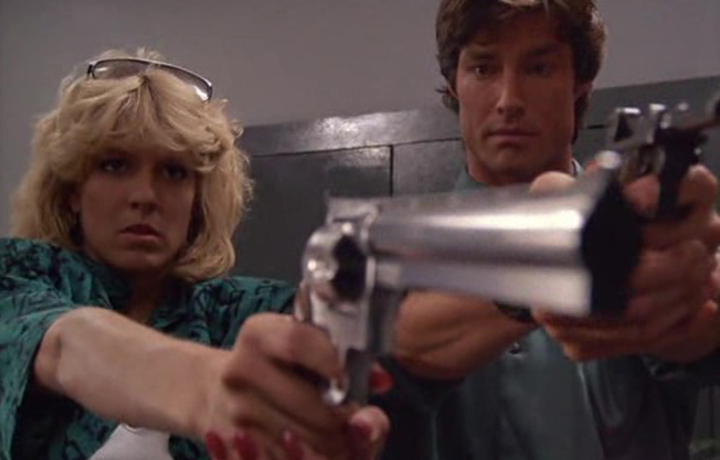 Sidaris said of his scripts that they only took him four days to write. “I think about it for up to two weeks and then I write them, and then Arlene reads them and she re-writes them.” Yes, his wife Arlene has always stood by the eccentric tastes of Andy as producer and co-writer, and just about everything else over the years, including interviewing the talent together. With his style and process so well defined, you pretty much know exactly what kind of narrative you’re going to get with Sidaris – a tad fast-paced, quite far-fetched, and totally awesome. The way he effortlessly transitions from a shower scene, to a brutal fight scene, to a Jacuzzi scene, all while keeping a narrative flow, is nothing short of masterful. You could argue that he should spend more time in pre-production, but the man was clearly an efficient moviemaking machine. 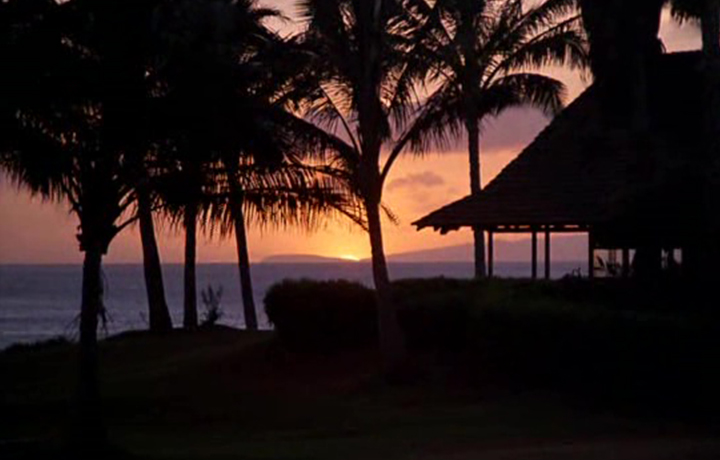 On this adventure we have a beautifully scenic start that slips effortlessly into a little back-story, sprinkled with double entendres as our leads get romantic on a boat. In fact it’s the titular boat from Sidaris’ previous production, Malibu Express. Yes, he’s quite brazen about referencing other movies, particularly his own, which actually creates a nice feeling of familiarity. We’re then treated to some rather clever opening credits done in a Honolulu customs warehouse, where we’re also introduced to a deadly subplot involving a freaky snake carrying “deadly toxins from cancer infested rats.” Who says four days isn’t enough time for genius? It’s the narrative gift that keeps on giving too, literally rearing its ugly head when you least expect it to break up the classic cops-vs-criminals plot. Hard Ticket to Hawaii introduces us to one of Sidaris’ longest serving leads, Dona Spier as Donna, a Drug Enforcement agent of some kind. She’s been posted on the quaint and picturesque island of Molokai to crack down on a sophisticated smuggling operation. She’s joined by Taryn, Hope Marie Carlton, a feisty civilian in witness protection who tags along just because she has a James Bond obsession. 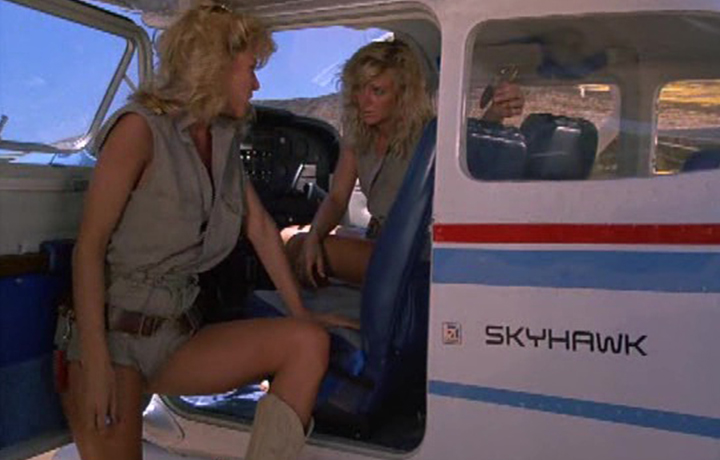 We follow the girls on their quirky routine, including transporting snakes and horny honeymooners. They even accidentally intercept a payload of diamonds from the evil smugglers, Seth – versatile Sidaris favourite Rodrigo Obregon – and Mr Chang – British television actor Peter Bromilow. You see, these masterminds had the clever yet comical idea of using a remote control helicopter to deliver the goods, and the girls unknowingly beat their henchmen to the drop zone. By the way, the main henchmen trio are delightfully eclectic and totally ridiculous. This is where things really heat up – home invasions, attempted assassinations, and explosive hit-and-runs ensue as the smugglers want their goods back, and the girls are the only things standing in their way. 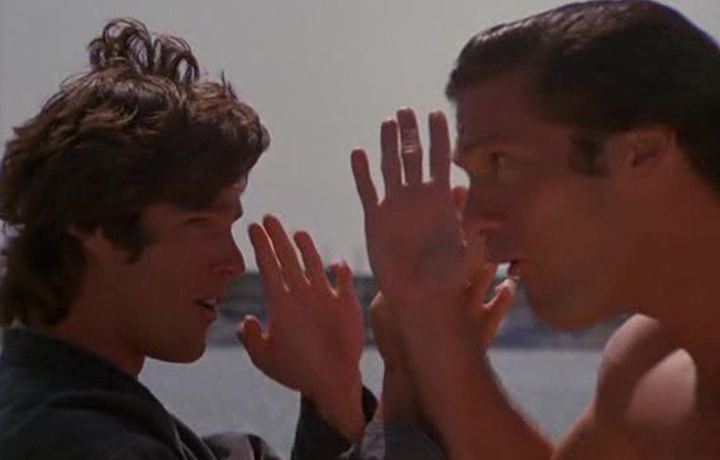 Fortunately, some fellow agents come to the rescue – The Bold and the Beautiful hunk Ron Moss, as special agent Rowdy Abeliene, and his partner Jade, the illustrious and eccentric kickboxing champion Harold Diamond (in his feature debut). This pair are introduced in perhaps the cheesiest, cringiest buddy training scene I’ve ever had the pleasure of witnessing, complete with tanned bodies, white teeth, and cultural insensitivity. From here on out it’s an even wackier ride as the agents are pitted against the sneaky smugglers and all sorts of odd folk crawl out of the woodwork. I’m talking female impersonators, oiled-up nunchaku chicks, and the coolest henchmen ever, Shades, who has dextrous frisbee skills to boot. Seriously, this is a climax that just keeps climaxing. 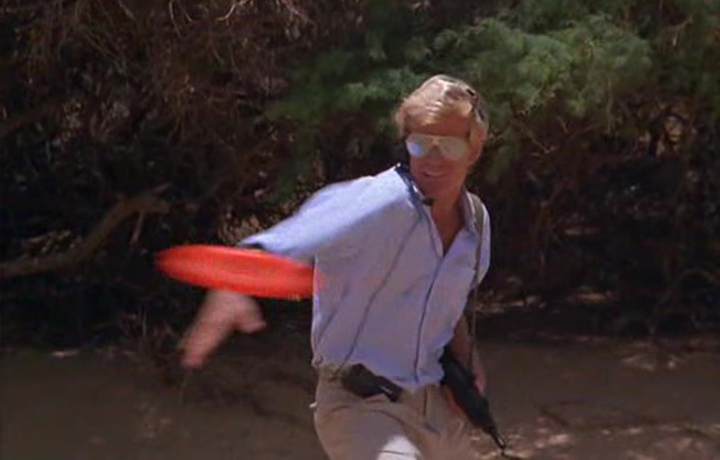 While it shouldn’t be a surprise at all, the main cast is more or less made up of super attractive people. Sidaris balances his obsession with casting Playmates by hiring some rather good looking fellas as well. What may be more surprising is the generally decent acting ability exhibited by the majority of the models, something both Andy and Arlene are big proponents of. I mean, they obviously have plenty of experience being in front of the camera. Carlton was a debutant, Cynthia Brimhall and Patty Duffek too, though Speir had done a couple of acting gigs herself, and is definitely the most capable. Whether you buy these gorgeous girls as federal agents or not, and their ridiculously silly uniforms showing plenty of skin, doesn’t really matter. Hard Ticket to Hawaii isn’t exactly the height of realism, and that’s what makes it great. The male leads are on the other end of the spectrum – made to look like idiots incapable of anything except sweet kickboxing and cracking bad jokes or naughty lines. “All I wanna do is suck the polish right off your toes.” Yeah, Sidaris has a way of treading a very fine line between seedy and everything else, but somehow usually manages to stay on the humorous side. 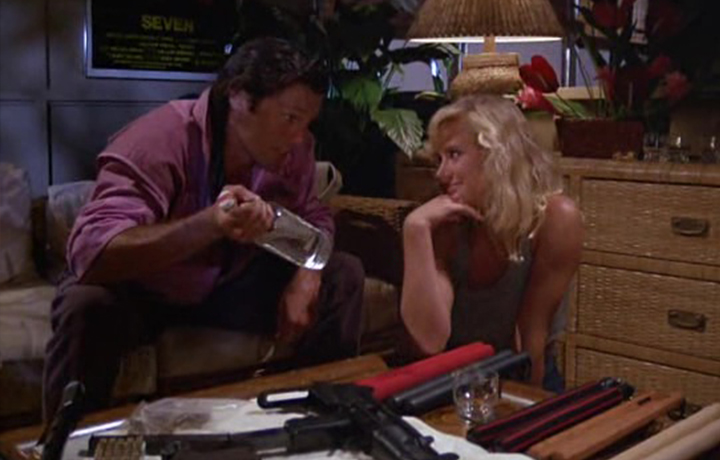 As far as the production goes, Hard Ticket to Hawaii looks pretty amazing. The scenery around Hawaii is truly gorgeous, with a fairly generous amount of aerial shots showing it off, and the 80s outfits, and tropical cocktails look to die for. I love the beach shack sets too, indoor plants, cane furniture and all. I can’t tell if it’s a stereotype or just reality, but they give such a laidback, island vibe to the drama and action alike. Sidaris has to be one of the single biggest contributors to Hawaiian tourism outside of Hawaii Five-O. Well, he’s got me sold at least. Cinematographer Howard Wexler, quickly becoming a regular collaborator of Sidaris’ at this point, does a good job with the scenic stuff. While he’s not very creative or mobile in the action sequences, he gets the job done, and the occasional jarring zooms are a good laugh, whether deliberate or not. There’s actually a second unit listed too, with Harmon Lougher behind the camera, though maybe that was just for the aerial stuff.

The special effects personnel on the movie aren’t really well credited either, yet they’ve done a pretty sweet job. The explosions are big, the bloody brawls are exciting, and feature all manner of cool and impromptu weapons which only occasionally look fake – from bladed frisbees to spear guns. The spontaneous displays of brutality contrasting with the otherwise comical tone is really what propels Hard Ticket to Hawaii to the next level of cinematic brilliance. Special mention should go to Russell Howell for his uncredited role as a gnarly, skateboarding henchman, which was the same story for him on Sidaris’ first Hawaiian movie, Seven. He gets to do some bizarre but cool stuff here, and at least he’s credited with “skateboard stunts.” The music, apparently supervised by Kevin Klingler, is pretty lame, but it’ll grow on you as it conspicuously changes from ominous bad guy themes to happy island music, and a dodgy Hogan’s Heroes rip-off. The theme song, however, is a wannabe Phil Collins cracker. 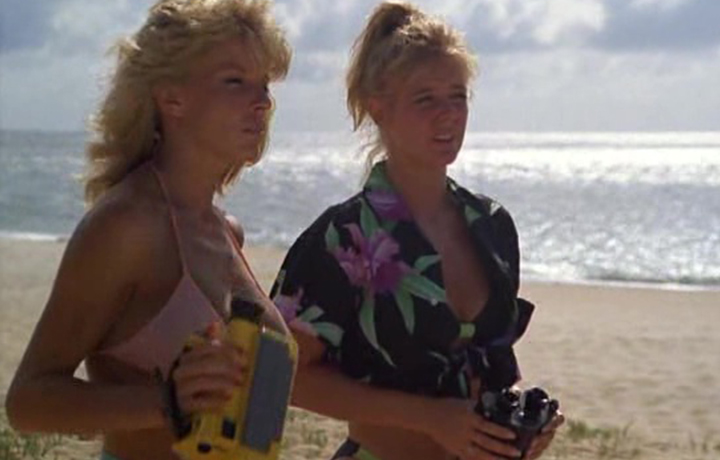 What a movie Sidaris has blessed us with here. What a legacy he has left. Hard Ticket to Hawaii is such a fine example of how bad movies can be some of the most enjoyable cinematic experiences available. Sure, it’s trashy, cheesy, and a little seedy, but it’s done with a cheeky grin and a twinkle in the eye. There’s something here for everyone, whether you’re into boys, girls, both, the beautiful beaches and mountains, or just the fight scenes and explosions. The narrative is genuinely entertaining, managing to make a fair bit of sense despite being totally far-fetched, and it all rolls along at a good pace that will keep your attention. The bad James Bond references and footballer gags are a laugh, of course Harold Diamond is a scream, the wacky henchmen trio are a delight, and the combat is appropriately cheesy and over the top. Sidaris really has outdone himself here, putting together a package of pure, trashy enjoyment, and even making time for a scathingly self-deprecating cameo. What a legend.