I hope you’re ready for a good time, because the luscious poster promises “Big Movie. Big Production. Big Girls.” I’m not convinced they thought too hard about the last part, and the rest is an outright lie. Then again, after coming up with a name as good as Slave Girls from Beyond Infinity, I’d say any creativity on the production was entirely exhausted. Fortunately, they already had a killer premise – a Star Wars take on Richard Connell’s short story The Most Dangerous Game. If She taught us anything, pairing classic literature and low budget Sci-fi is a guaranteed knockout. Fittingly, this is the last hurrah of Ken Dixon, a guy who pretty much only made 80s B Movie montage “documentaries,” the kind replaced by Mr Skin. Here he’s delved deep into popular culture, combining the primal desires of scantily clad babes and Sci-fi for a rollicking adventure, where unsuspecting, shipwrecked slave girls stumble into the dark and misty world of an insane hunter hermit and must fight for their freedom. 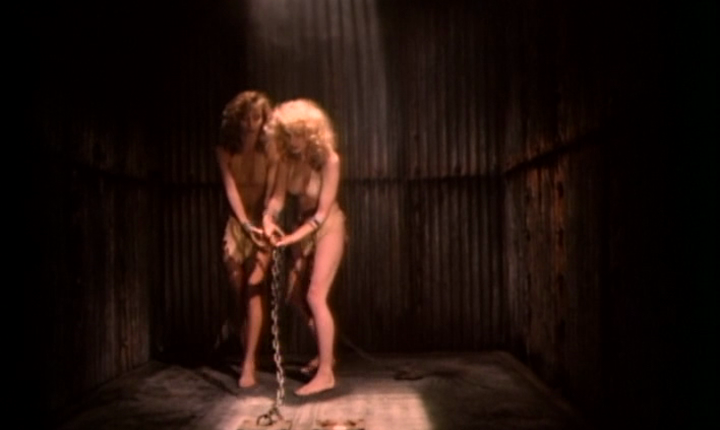 After we’re indulged in 90 seconds of opening credits on a black screen – yes, really – we get a pulse-raising, foreshadowing sequence where a playmate type in loincloths tiptoe-runs from a gimpy, budget Predator and a discount Christian Bale. Loincloths and sleepwear will become a major part of the coming movie from here on, so prepare yourselves. Our heavily hairsprayed protagonists, Daria and Tisa, have been captured in unexplained circumstances and are imprisoned on a spaceship, presumably en route to be sold as slaves. I’m not sure if they’re meant to know each other, but writer-director Dixon certainly seems undecided. Luckily Daria – Elizabeth Kaitan – has super strength and super smarts, and knows exactly how to bust out of a high-tech cell. The hideous, bogus Sci-fi jargon that follows is a total choking hazard, but it is delicious. Tisa – Cindy Beal – makes for a competent accomplice in the escape, and the pair screeches at each other as the vaguely convincing ship hurtles into space. 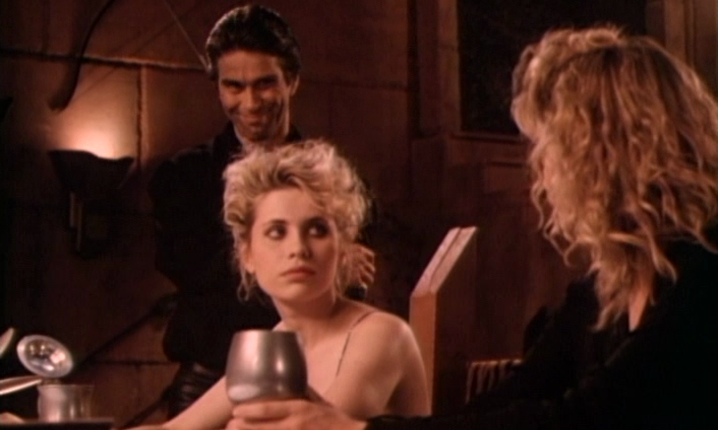 That’s where the mysterious Christian Bale lookalike comes in, with his Venus flytrap planet. This creepy loner, Zed – Don Scribner, in the first leading role of a relatively steady B Movie career – is obsessed with hunting, which explains why he lives in a big, alien, hunting lodge and owns a “small planetoid” sized tractor beam. He graciously gives shelter to our dynamic babe duo and introduces them to his other guests, Shala -scream queen Brinke Stevens – and Rik – VFX artist Carl Horner, who built some of the models on the production. Rik is a horny young guy, all for the cause of course, as he “subtly” warns our girls that Zed’s paradise is not what it seems. Well, more that it’s everything it seems, with the heads on the wall, and the two big android goons. That doesn’t stop there being a typical, low budget sex scene – the kind where the trousers and panties stay on – only it’s just a few shots, followed by a long, sappy conversation about how great it is to bang.

The budget on Slave Girls from Beyond Infinity was pretty damn low by all accounts. It came out of a lucky deal Dixon did with Charles Band of Empire Pictures, who he cut trailers for. The massive, 14 person cast is made up of crew members and young actors – Brinke Stevens being the only one with any “real” experience. Scribner turns out to be more like Christian Bale than I imagined, as in he looks a lot like him, but he also proves to be the most competent actor in the production. The adorable Elizabeth Kaitan – Ricky’s unfortunate girlfriend in Silent Night, Deadly Night Part 2 – makes up for generally poor delivery with her trademark, infectious enthusiasm. That said, I don’t think any actors could make such painfully bad, Sci-fi dialogue work, not even Alec Guiness. The totally inexperienced Cindy Beal comes across a little more believably, although she gave up on acting following this. She was a model Dixon found waiting tables, as the LA fairy tale goes, and now she’s an accountant. First-and-last-timer Carl Horner plays the young, seedy Rik capably, and Kirk Graves deserves a mention for his work, as both a set builder and android actor.

Everything about Slave Girls from Beyond Infinity screams quality and class. The girls spend an exhausting amount of time running and fighting in loincloths or sleepwear. Then there’s the fantastically low production value. The sets are mildly impressive, but entirely too small – I hope you like weird, Aztec style rooms, and dark, steamy space-jungle. Sadly, along with the bad-cosplay style costuming, these sets would have eaten the majority of the budget, despite all the matte painting and fairly competent miniature use. The worst part is that the sets dictate annoyingly claustrophobic camera work for pretty much the full 75 minute runtime. Yes, it is nice and short. There’s no help from the editing department either, despite there being three editors on board, one of whom – Jim Stewart – went on to Monsters Inc. and other children’s animation. The wacky creatures featured are mostly only good for a laugh, and while there’s clearly effort behind the costumes, they just look silly. A shout out to The Halloween Society for providing masks, whoever they are. The laser weapons make for a cool element, when they actually get used – probably because they require sweet, hand-drawn animations, from a guy who went on to direct Rugrats Go Wild. No, that isn’t a porn parody.

Slave Girls from Beyond Infinity is an incredibly enjoyable journey. I mean, it’s totally garbage, typical low budget, derivative narrative stuff, but gosh is it fun to watch. The blatant attempts to make guys salivate over girls on screen are second only to the constant, humorous reminders that this film was made with little experience and no budget. Dixon has truly made a mockery of The Most Dangerous Game’s narrative, filling it with fantastically woeful dialogue for good measure. The actors clearly don’t know how to tackle it either. While some unashamedly spew forth their lines, others attempt to go out with some dignity. Dixon clearly didn’t have a good handle on writing or directing, a fact endearingly evident throughout. Apparently in an effort to make the movie work a little better, producer Don Daniel stepped in with some more money to do pick-up shooting. Though I can’t really can’t tell what he’s improved, I am more than stoked with this titillating, rip off, space adventure the way it is.