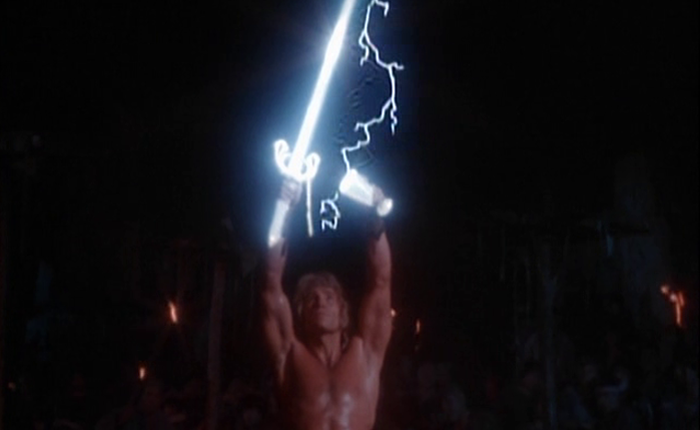 What a tangled web of fantasy and intrigue we have here. Spun from the blandest of materials, and woven so ineptly into a short and sweet tapestry of trash. The most impressive part of Deathstalker is that a group of people cared enough to put time and effort into such a garbled and generic attempt on the Sword and Sorcery genre – already a delightful quagmire itself. It’s a dirty, sweaty spectacle, taking directly from Dungeons and Dragons, He Man, and The Lord of the Rings.  Debutant director James Sbardellati is really behind the eight ball, running on a seemingly dirt cheap budget that, along with a general lack of special effects, spawns some hilariously abysmal prosthetics and makeup. However, the tackiness of the production is a mere footnote to Howard R Cohen’s screenplay, which is totally void of imagination and originality, and makes little sense. It’s all rather mind blowing. Deathstalker sure timed itself well for the early 80s Sword and Sorcery boom, but that’s no surprise considering it counts low budget wizard Roger Corman, and genre expert-in-the-making Frank K Isaac, among its producers. Bizarrely, in spite of this, the production fails to do well at just about everything. The director, Sbardellati, was fresh out of USC with seemingly no experience, so that may explain the movie’s fantastic abundance of shortcomings. Can it really be that hard, though, to shoot sweaty, oiled-up men clothed in rags, running around wailing on each other and feeling up women in similar states of undress? Perhaps ‘hard’ is the wrong word. I mentioned Cohen’s completely rubbish narrative, which definitely deserves a lot of the blame – odd considering the guy cut his teeth on some badarse Cirio H Santiago projects in the 70s. Not long after this, however, he went on to writing for The Care Bears , so maybe he’d just given up trying to beat that peak. 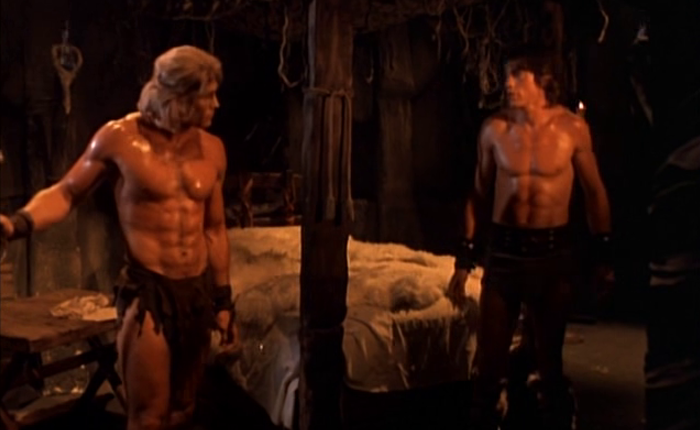 The big problem with the story is not its total lack of originality, I mean that’s par for the course on low budget productions. You can more or less overlook narrative illegibility for the same reasons. The real problem here is Cohen’s utter failure to be even slightly interesting, or get us remotely invested in proceedings. It’s quite impressive really. The majority of the characters, to whom we are painfully introduced throughout, have absolutely no impact on events, taking up copious screen time without getting a shred of development. Even the guys you think will be important aren’t. There’s our hero Stalker, and, maybe at a stretch, his acquaintance Oghris, but everyone else is just hanging around. It’s humorously insincere, like our writer had taken a couple of blurbs from the fantasy section and left it at that. The whole first act, where we are supposed to be getting immersed in the world, just goes from one, garbled, exposition-spewing scene to the next, all the while making very little sense. 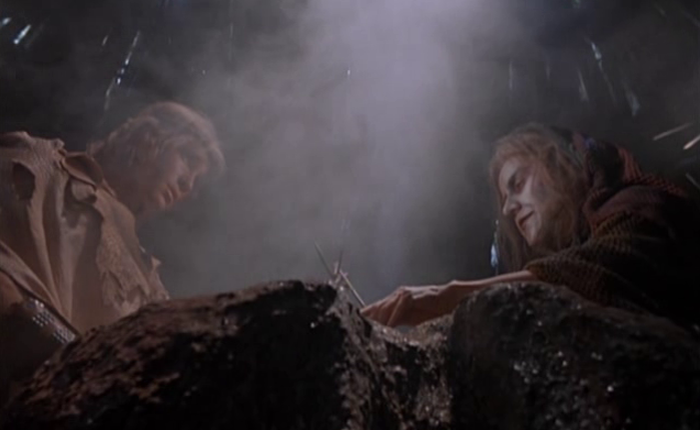 To boil the story down to something sort of palatable, our tanned, muscle-bound, blonde-wigged hero, is Deathstalker – the strangely familiar Rick Hill. However, he wants no part of the hero life, claiming unconvincingly to be a rogue outlaw. That works until a crazy, and really obnoxious, witch lady tells him to get his act into gear and embark on an epic quest. Stalker must seek the ‘three powers’ – a magic sword, amulet, and chalice – in order to ‘become the power’ and banish an evil sorcerer, thus restoring order to the once-proud kingdom of wherever he is. The details of the quest are vague, but very familiar to anyone aware of The Lord of the Rings. Along the way he meets all manner of fantasy folk – from gross-looking guys in a cave, to Part 3 Jason Vorhees himself, Richard Brooker, as Oghris. In a rare display of sensibility, Deathstalker jumps straight into the action from the opening credits, involving some conflict between deformed forest hobos and a would-be rapist. Of course, Stalker pops in to say hi, and ends up cutting everyone in sight. The only problem is that the action features only the most basic of swashbuckling, and no cool special effects, bar some really dodgy beheadings. Seriously, they look like a sock with a melon in it and a hat on. Sbardellati strangely seems much more comfortable showing nudity than a little gore. Seriously, there is flesh everywhere – all the female denizens of this strange fantasy land seem to be clad in not much more than a shawl and a thong. Except the mudwrestling ones, they just have thongs.

Lana Clarkson as warrior Kaira is particularly over the top, you’d struggle to find ‘armour’ more revealing in a Japanese RPG. Even Stalker looks skeptical. But I digress. Thanks to this lack of intensity in the action, the proceedings are all pretty lame, there’s not even any cool effects or sorcery stuff to save it. Even the shapeshifting, of which there is a fair bit, looks hilariously jarring. If you can’t get on par with 20 year old television productions – I’m talking the beloved Bewitched and I Dream of Jeannie – why even bother? One small saving grace is the surprisingly decent sets and locations in the movie, which was shot mostly in Argentina with a predominately local crew. While not particularly convincing, they’re a ways further than anything else the movie has to offer.

Does all this doom and gloom I’m spouting mean that, even from a total trash fanatic’s perspective, Deathstalker is a waste of time? Of course not, I’m just giving warning that while your favourite guilty pleasures may have redeeming elements, this has none. That, ironically, is it’s redemption. None of the elements in this production are close to good, it’s a total wasteland. Okay, I’ll relent and say that Rick Hill is ripped and does kick some arse, and there are strange fantasy girls aplenty, but that still leaves a lot to be desired. There are no killer action sequences or special effects to lift the bland story, no cool scenes to make up for the lack of production value, so on and so forth. It’s honestly rather impressive how fantastically pointless the movie is. So, if you’re in the mood for a bit of Sword and Sorcery, and want to see the worst on offer, this is a pretty good place to start. Did I mention it somehow spawned 3 sequels? Without poor Sbardellati though.